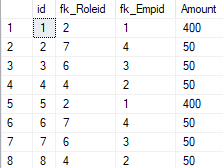 Hi, I have this table. I want to write this query in my controller.

which shows result of 800 in sql. I don't know how to write it in both EF and Linq. If someone could kindly show me the way to write in both ways would be really helpfull.